I recently did a great challenge at UIUCTF 2022 that forced me to finally bite the bullet and learn IPv6. This particular challenge involved forcing hosts on a network to change their IP addresses by crafting and sending a rogue router advertisement. During the event, I also found an unintended solution that I’ll be discussing, and I’ll also be explaining some fundamental IPv6 concepts in-depth throughout this writeup so that you, too, can learn the basics of IPv6.

To start, IPv6 was first introduced in 1995 as the successor to the more dominant IPv4 due to the realization of the IPv4 address exhaustion problem: IPv4 has 32-bit addresses, meaning that there are only \(2^{32} = 4,294,967,296\) possible IPv4 addresses; there are not enough IPv4 addresses to keep up with the growth of the Internet. IPv6 was ratified in 2017 and is now steadily growing in use with substantially larger 128-bit addresses. Its current specification is described in detail by RFC 8200.

Notice how in IPv6, leading hexadecimal zeroes are allowed to be omitted. Addresses are represented as 8 colon-separated hexadecimal groupings of 4. IPv6 addresses can also replace consecutive groups of zeroes with :: once. For example, the following is the IPv6 loopback address and its shortened form:

Due to the larger address space available in IPv6, we can get rid of something known as NAT.

When you communicate on the Internet, the other end can only see your public (exit) IP address thanks to NAT, and this public IP address is typically shared with everyone else in your home network, coffee shop network, university network, or whatever other network you may be using at the time, unless you’re routing your traffic through a VPN, TOR, or other sort of proxy, in which case NAT is performed at one or more additional levels.

IPv6 obsoletes NAT. In IPv6, all nodes have a globally unique address that can be used to communicate outside of their local network. These can be assigned manually, automatically with DHCPv6, or, as we will discuss, autonomously using a new mechanism known as SLAAC.

Stateless Address Auto-Configuration (SLAAC) allows hosts to get their own globally unique addresses in a stateless manner, meaning that there is no need for any sort of central server or local cache to keep track of existing address assignments on the network. Hosts generate their own link-local IPv6 addresses and then make sure their address is unique within their local context using Duplicate Address Detection (DAD), where they ask the local network if anyone else in that network has that address by sending out Neighbor Discovery Protocol (NDP) messages.¹

This link-local address can be generated any number of methods. One such method to is suffix the link-local address prefix fe80::/64 with an interface identifier generated using the EUI-64 method described in Appendix A of RFC 4291: 48-bit MAC addresses can generate an EUI-64 identifier by inserting ff:fe in the middle of the MAC and then flipping the 7th bit from the left. For example:

If a host receives no response from NDP and thus, DAD finds out its generated link-local IPv6 address is unique within that link, then the address can now be used for local-scope communications. In order to get a globally unique address for global-scope communications, the host can now send router solicitations using its link-local address. A responding router advertisement informs the host of the network’s Global Unicast Allocation (GUA) prefix, and the host suffixes this with it EUI-64.

The entire process from joining a network to generating a link-local address and then a globally unique address may look something like so:

Now that we understand IPv6 addresses and how they’re made, we can finally start the challenge. 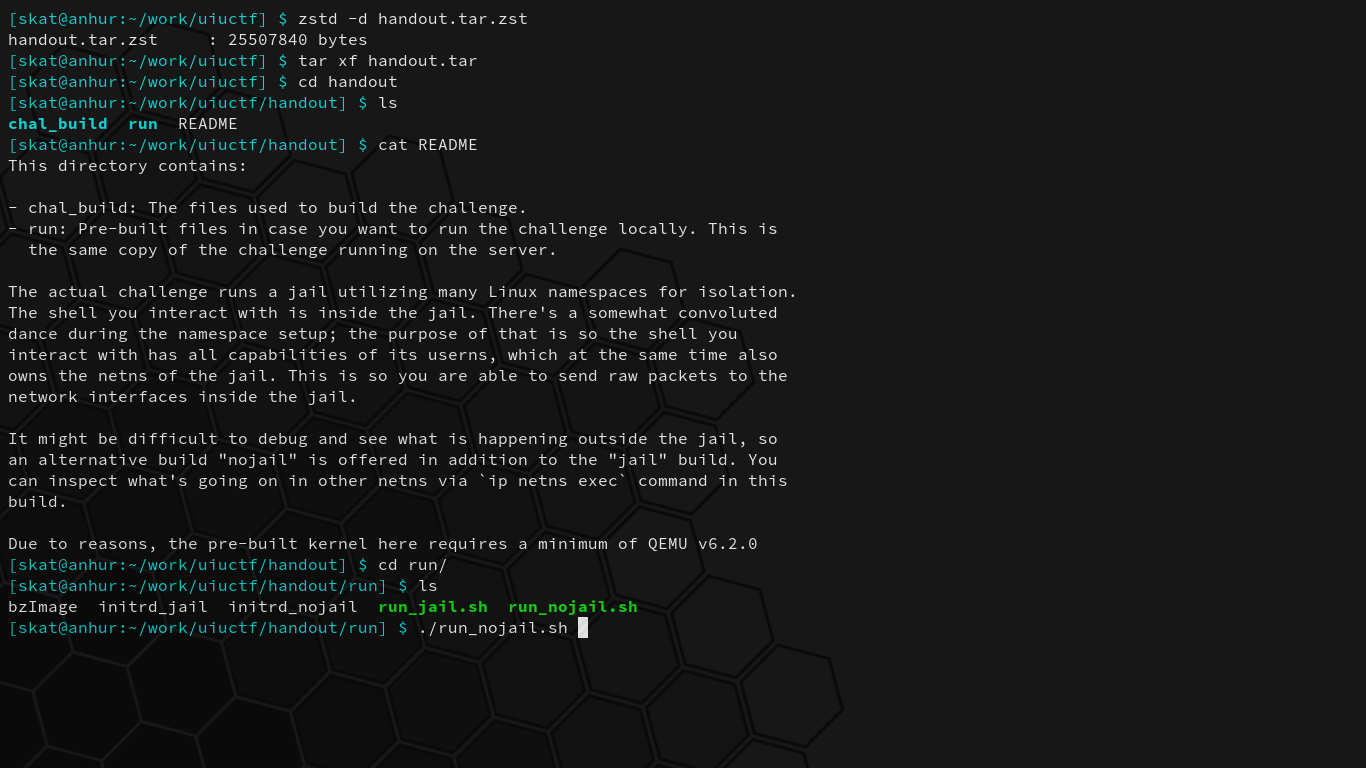 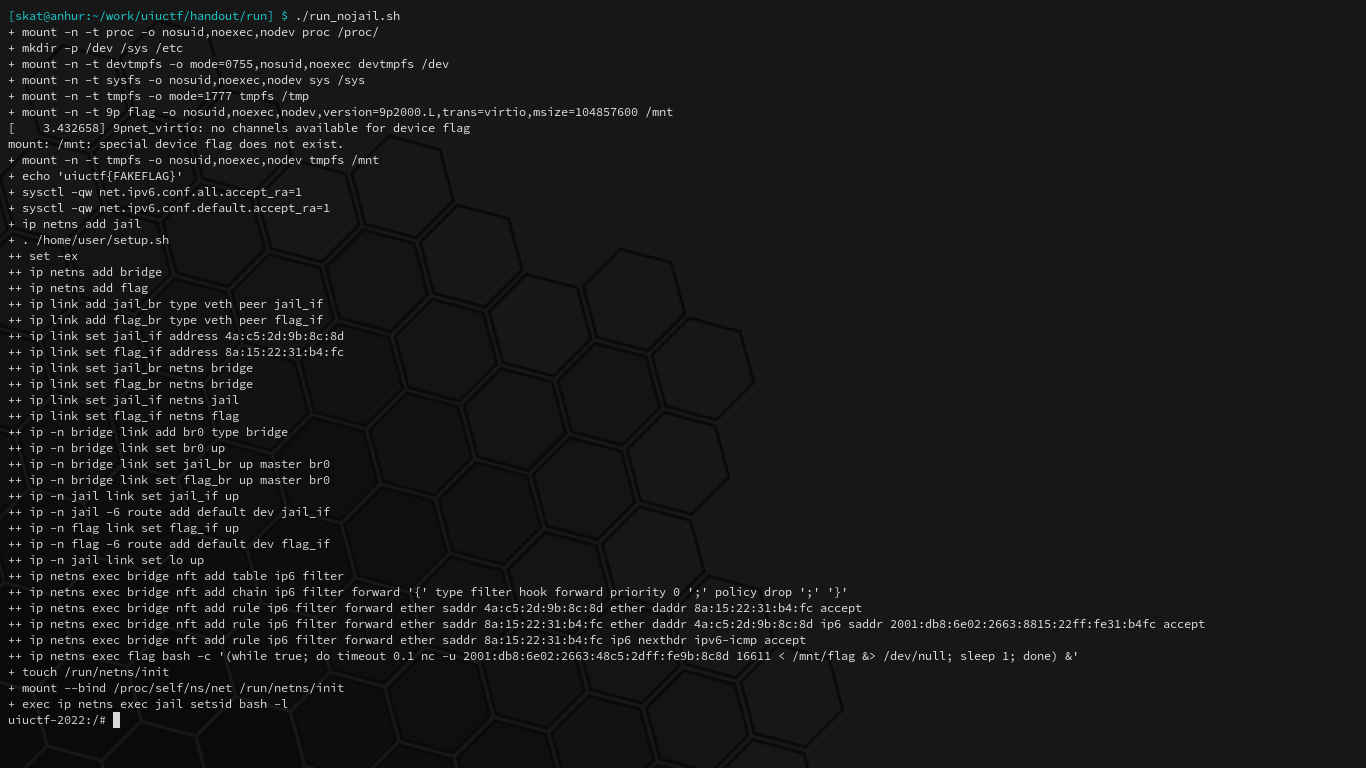 A bunch of commands are run when we first start up the challenge. Let’s dissect what they mean so we can understand the environment we’re dropped in:

We have access to jail_if, which is linked to jail_br that shares the bridge namespace with flag_br, which is linked to flag_if. The jail shell simply restricts us to the jail namespace. We’re running the non-jailed challenge locally so we can better debug and see what happens on other namespaces if needed, and once we create our solution, it must work on the jailed counterpart running on the remote challenge server.

On the bridge namespace, nft (netfilter tables, not non-fungible tokens) rules are added to an ip6 table called filter that only allows–

Wait a second. That table isn’t supposed to be an ip6 table; it’s supposed to be a bridge table. That means that these rules are useless, and that all we need to do is change our IPv6 address to that which the flag namespace is sending to in order to get the flag.

We can run this command to give ourselves the flag’s destination IP address on our jail_if interface:

Then, we can run tcpdump and exfiltrate the pcap back to our machine by copy-pasting the data as base64, and view the traffic with Wireshark. That is to say: 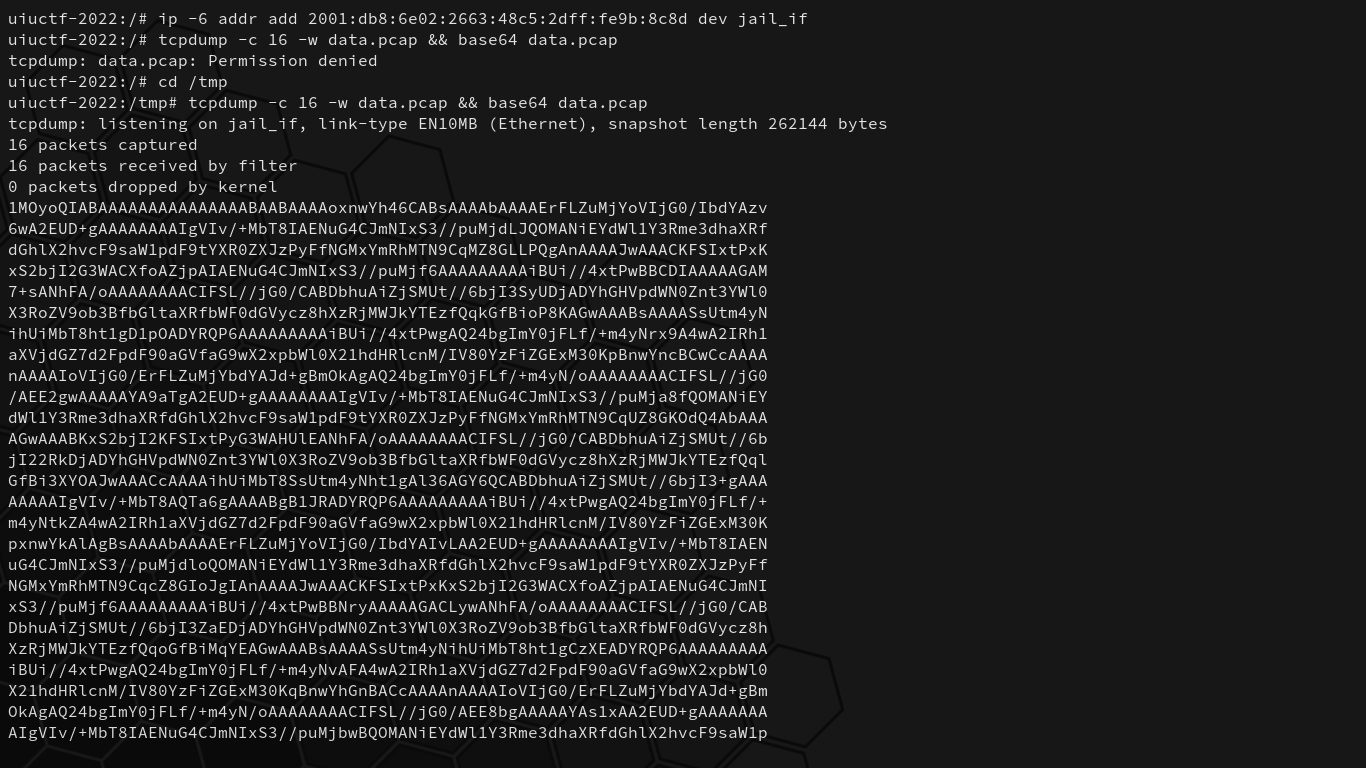 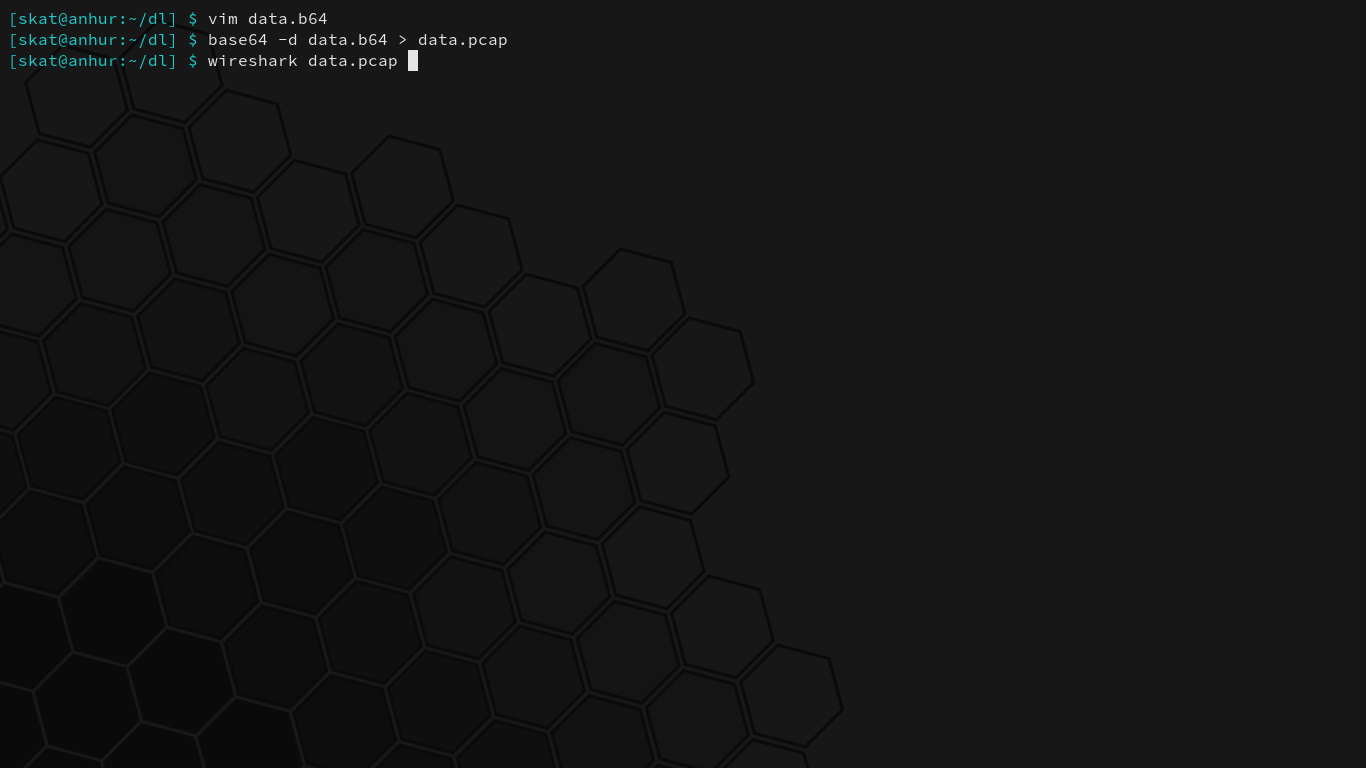 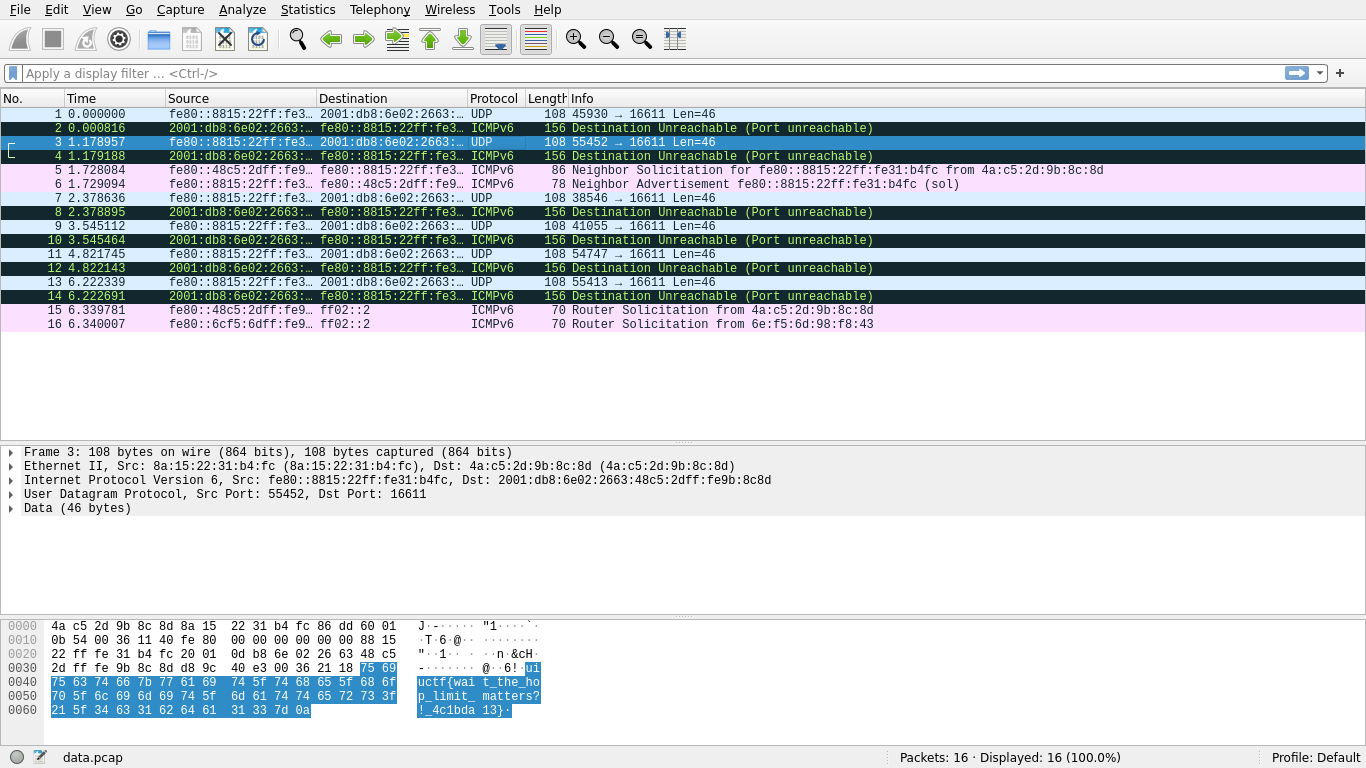 Netfilter is also too complicated.

The unintended solution has been fixed. 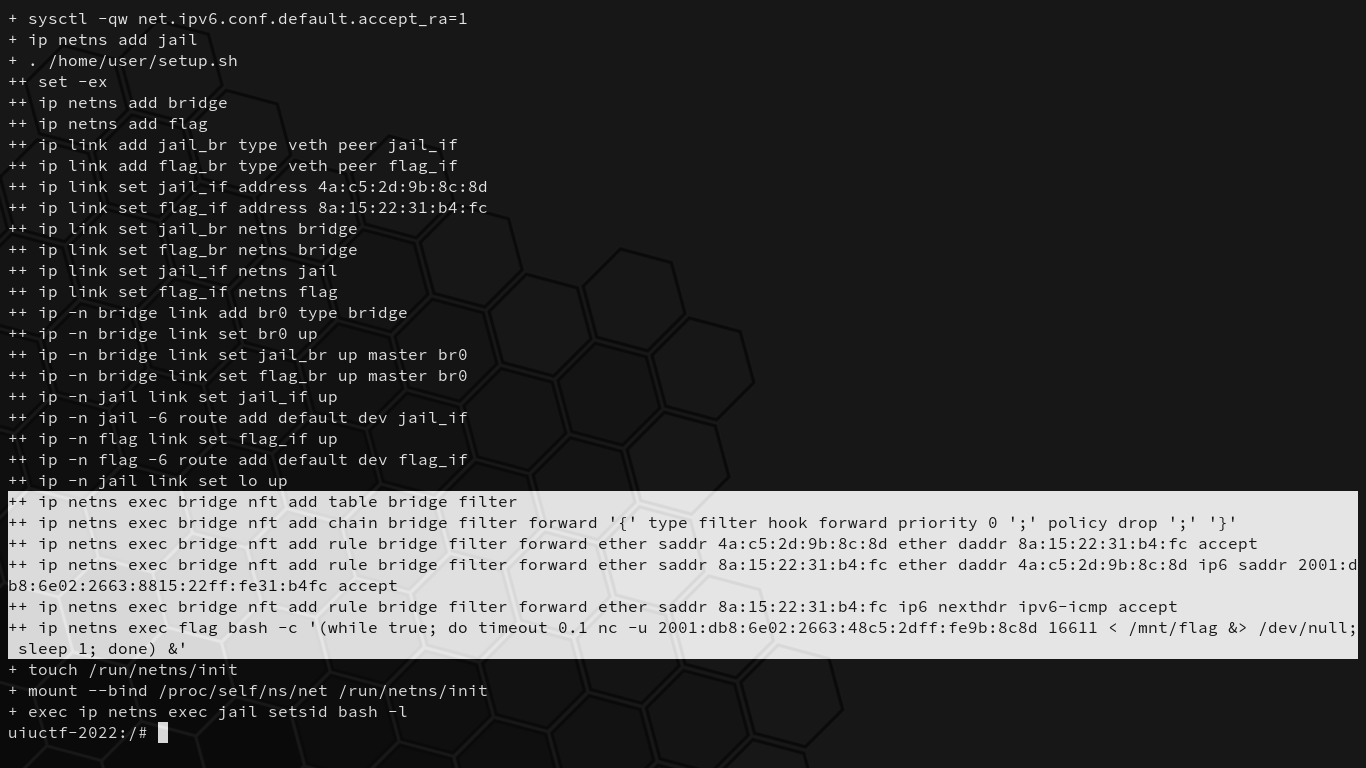 As I was saying before, on the bridge namespace, rules are added to a bridge table called filter that only allow data to pass if one of three rules are satisfied:

The hard part is implementation. I chose to write my exploit in C, compile on my local system, and then transfer it to the challenge server by encoding-copy-pasting-decoding base64 data since there’s no GCC on the challenge server. My exploit sends a rogue router advertisement with the right source and destination MACs and the desired prefix:

Since there were no libraries on the challenge server, I had to compile with static linking. To reduce transfer time, I gzipped it up before encoding-copy-pasting-decoding the base64 binary:

Transfer speeds were so slow that I sometimes timed out on the challenge server and had to start all over again. Eventually, I did manage to get it in time. After that, it’s simply changing our IP, running the exploit, dumping network traffic, and then exfiltrating the pcap just as we did before: 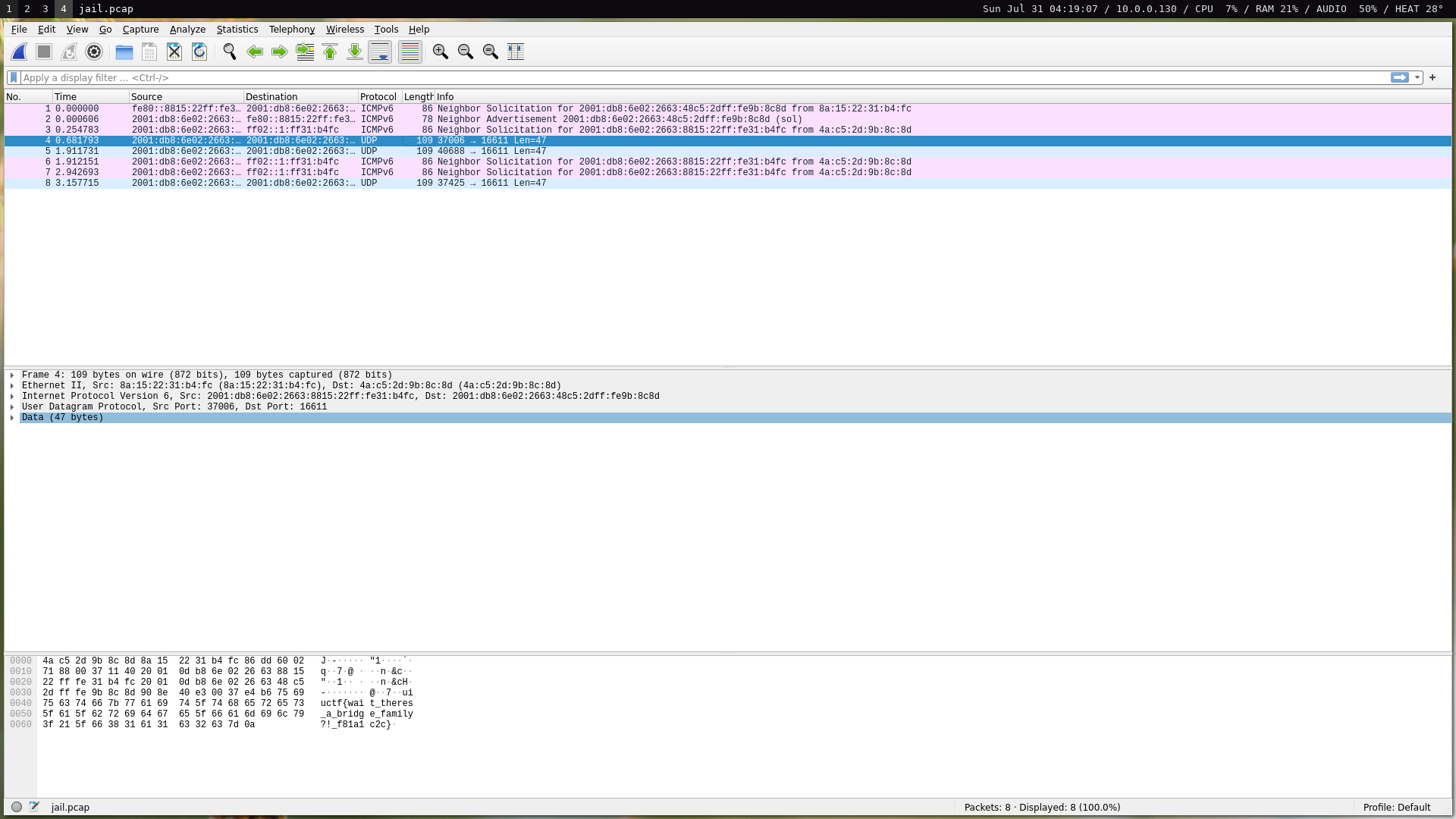 In a conversation with the author through modmail after I completed the challenge, I later learned that the machine had trafgen. 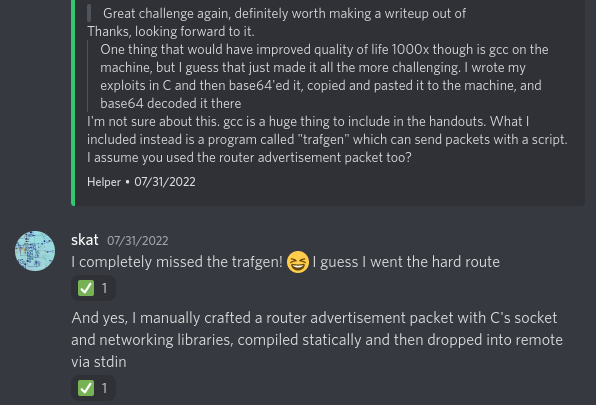 Lovely challenge that forced me to finally start learning IPv6.

¹ Note that this leads to an interesting denial-of-service (DoS) attack in which a malicious host can respond to all of a connecting host’s DAD queries with spoofed, positive replies, resulting in the connecting host never being able to get an IPv6 address for routing and thus, no service.

All networking diagrams were created by me using yED and ImageMagick. You may use them in your own work for free, but I ask that you please attribute them to Shawn Duong, shawnd.xyz.